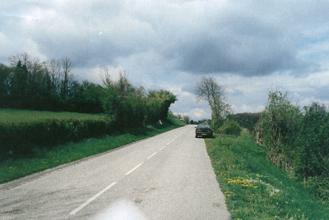 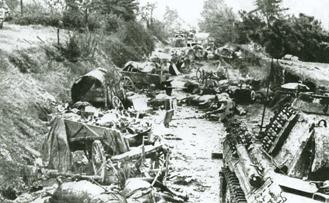 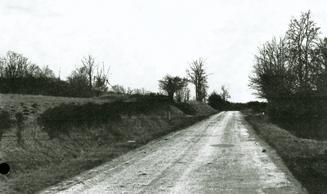 This August 4, 1944 photo (top right) shows this road, one of three used for German retreat from the Falaise Pocket, littered with destroyed tanks, vehicles, wagons, slaughtered horses and slain soldiers. Two Polish Sherman tanks are seen standing on the grassy slope to the left, their guns aimed towards the road. The Polish Armored Division moving from the north fought up to this hilltop overlooking the German eastbound retreat route between Chambois and Vimoutiers. The Polish firepower combined with artillery support and fighter bombers decimated the trapped Germans. Attacks to dislodge the Poles from their positions were costly to both sides.